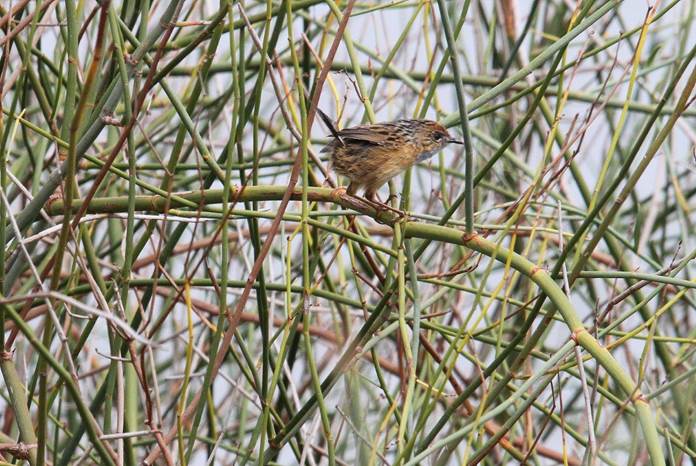 Clayton Bay Landholder Kathy never expected to have a bucket list moment in her own backyard.

However, a chance visit to the block Kathy and her husband Damon own on the Finniss River turned into a very lucky day for the avid birdwatcher.

Kathy spotted an endangered Mount Lofty Ranges Southern Emu Wren in what might be the southern-most sighting of the tiny bird. The initial sighting of a male wren was followed up just before Easter by the exciting discovery of a female wren – signalling the exciting possibly that the birds are a breeding pair.

The birds have been taking advantage of the new habitat created by revegetation projects for the Coorong, Lower Lakes and Murray Mouth program. The male wren only appeared after being frightened by a snake at the water’s edge and flew into the open along with a family of Blue Wrens.

‘It was the first time we had seen any wrens on the property – there was a single Emu Wren with a family of nine blue wrens,’ she says.

‘I was in the right place at the right time. I was beside myself – seeing an Emu Wren was on my bucket list!’

‘And to discover just a few weeks later that the little male wren had female friend was a joy, and hopefully a sign of things to come.’
‘I was also thrilled for the teams that had planted there.’

Kathy and Damon bought the block in 2010 at a time when the river had receded significantly. Enter the Goolwa to Wellington LAP who coordinated the drought response planting program on behalf of the Department of Water Environment and Heritage (DEWNR). A total of five community organisations planted on the property over a number of years in all weather conditions.

Kerri Bartley, GWLAP Revegetation Project Officer coordinated some of the onsite plantings and manages the ongoing maintenance of the site.

‘It has been fantastic to have been involved in a project where the outcomes and rewards can start to be seen – from a bare paddock to habitat for native birds and other important wild life is a win-win for everyone,’ she says. In total, 12,660 plants of 52 local, native species were planted on the property.

‘The newly planted habitat will hopefully continue to attract other native fauna to the area in the future.’

Kerri says there were so many positive aspects from the project that went beyond the planting itself.

‘The community groups used the plantings as fundraising opportunities for their local facilities and services,’ she says. ‘The groups that were involved ranged from Strathalbyn Soccer Club and disability group Community Lifestyles to Ashbourne Cricket Club, Strathalbyn Scout Group and Victor Harbor Hockey Club.

‘All of these groups will be returning in 2016 to plant again which highlights the enormous success of the Community Revegetation Project.’

The community project is part of the CLLMM Recovery Project’s massive revegetation program – one of the largest of its kind in Australia.

Vegetation Program manager Hafiz Stewart says the program has tackled the ecological problems of the region at a landscape scale by prioritising the vegetation communities to restore, and by determining where restoration activities should occur.

The planting activities have increased the resilience and connectivity of native habitats, and provided valuable refuges for the region’s native flora and fauna, such as the recently sighted Southern Emu Wren, he says.
‘This is fantastic news, and really indicates the value of the collaboration between the community and the Department over the last five years. The sighting is particularly timely, given that the CLLMM Vegetation Program is nearing completion and to see that we have successfully provided habitat for such an iconic South Australian species is the icing on the cake.’

‘The Mount Lofty Ranges Southern Emu Wren is an endangered species that’s still declining despite a long-term recovery plan – there are a maximum of 200 individuals left across the Fleurieu.’
Mr Vale says it is the first time that this bird had been spotted in an area of revegetated habitat. It was ‘really heartening’ as the birds were quite specific in their habitat selection and use.

It has been more than five years since the property was first planted. Kathy said there had been huge changes in that time and what was originally a barren paddock was now home to trees 12-15 feet tall, and a range of other flora.

In the early days not many birds frequented the property either and ‘to see any bird was a big deal’.

‘The diversity has changed enormously – just in the last few months we have seen honeyeaters, ducks, chats, lapwings, willy wagtails, harriers, kites, a peregrine falcon, and of course the wrens – things are starting to come back that we have never seen there before. Even the growing diversity of bugs is incredible. It’s really positive to see how far things have come.’

‘Things are starting to happen there – all it needed was a little encouragement and nurturing.

‘Just to see the enormity of what everyone has achieved – it’s quite an amazing thing.’

Below: How the site has changed over time 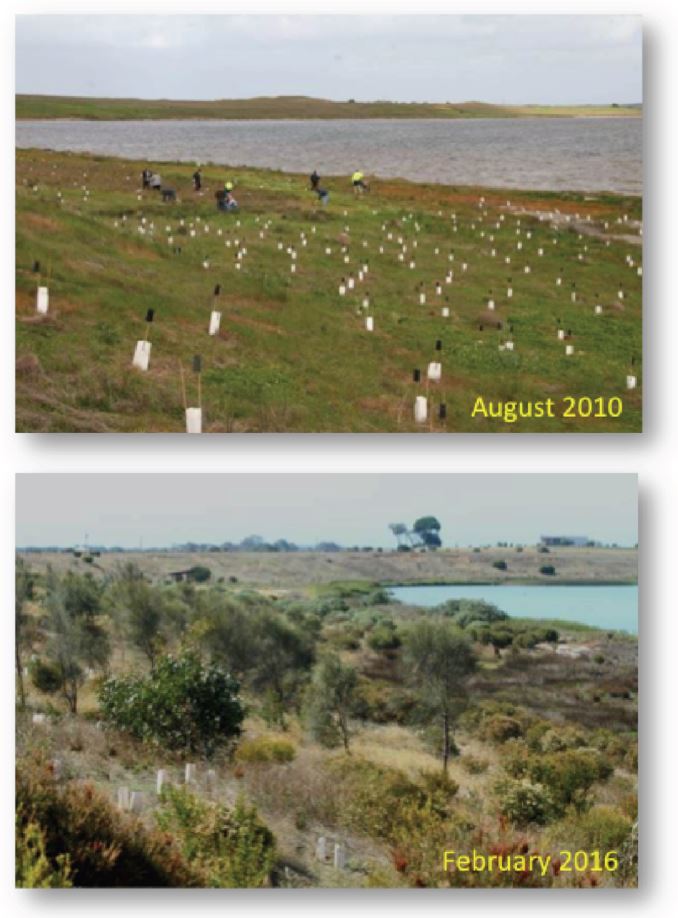